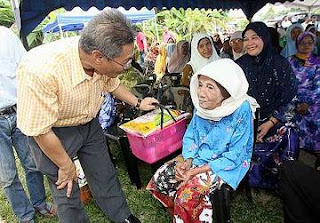 ABOUT 1,000 people in Penang, comprising the hardcore poor, orphans, single mothers, the disabled and low wage earners will receive foodstuff worth a total of RM50,000 in stages during Ramadan.

Mansor, who is the Penanti assemblyman, said the items were sponsored by Pusat Uruz Zakat (PUZ ) and by several corporate bodies.

“Even though the aid may not be much, it is important to continue the tradition of giving to the less fortunate,” he told reporters after handing over food items to 400 people at his service centre in Penanti.

During the same event, he presented a wheelchair to a disabled person from his constituency and a computer to a religious school in Padang Ibu.

Mansor said he would also be giving away similar foodstuff to 100 non-Muslims in his constituency.

He said that in conjunction with Hari Raya Aidil Fitri, 95 people comprising imams and mosque workers from the Penanti constituency would receive between RM100 and RM150 at an event to be held at Masjid Tun Abdullah in Tanah Liat near Bukit Mertajam on Sept 4.
at 9:56 AM