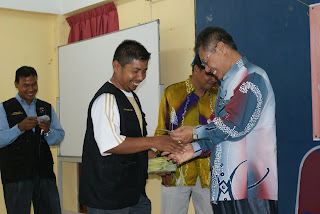 Deputy Chief Minister (I) Datuk Mansor Othman said the state government, together with the local councils, would try to license these traders, who are members of the Penang Malay Night Market Traders Association.

"This is so that the state government and local authorities can monitor and control the whereabouts of these traders," he said.

The hawker's licence costs RM36 and has to be renewed yearly.

"However, the traders have to abide by the local council's regulations before getting the licence," he said, which includes getting typhoid shots, and following safety and cleanliness measures.

He said the state government would discuss plans to legalise the non-bumiputra night market traders in the near future.

"The pasar malam are important as they help with the state government economy. We will support their businesses whenever possible," he said after presenting more than 40 Sungai Ara night traders with their hawker licences today.

Mansor hoped the night markets would improve and realise their potential as a tourist attraction.

"On my recent visit to Taiwan, the night markets there are managed properly, with sales of products and games for children, and they are a tourist attraction," he said. -- theSun
at 10:18 AM