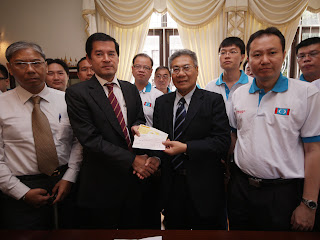 AFTER raising RM80,OOO, the Lions Club of Bayan Baru organised a humanitarian mission to the Thai military camp in Songkhla, Thailand to deliver drinking water, instant noodles, diapers and other necessities.

He said the mission involved a convoy of three trucks and four cars led by the club’s president Datuk Goh Eng Hoe.

He said the aid was handed over to the military, on behalf of the Thai people.

“The mission spent RM50,000 on buying the essential items while the balance RM30,000 was donated to the Rajaprayanugroh Founda-tion,” Khoo said, adding that Thai consul-general Voradet Viravakin had received the RM30,000 cheque on behalf of the foundation on Oct 29.

The club had raised the funds by way of a fund raising campaign during the Bukit Jambul Hikethon on Oct 23.

“We are still continuing with the campaign until the situation in Thailand improves,” said Khoo, who is also the club’s immediate past president.

Half of the money was collected from its members and the other half raised in a charity sale recently.

Deputy Chief Minister I Datuk Mansor Othman, who is Penang PKR chairman, handed over the amount to Thai Consul-General Voradet Viravakin at the Thai Embassy on Tuesday.

Giving out land leases for 60 or 99 years ‘nothing unusual’

KEPALA BATAS: There is nothing unusual about the state government giving out land leases for 60 years or 99 years, Deputy Chief Minister 1 Datuk Mansor Othman said.

He said such a move was in accordance to provisions under the law which was also practised by the previous administration.

He said that the north Seberang Prai district office had this year renewed 60-year leases on pieces of land in Sungai Lokan, Permatang Pauh to four individuals, who had earlier made way for the Butterworth Outer Ring Road (BORR) project in Bagan Dalam.

He said this after presenting TOL approval letters to 15 applicants at the district office here yesterday.

The 15 applicants had applied to renew their TOL on land in resettlement areas in Hujung Batu, Butterworth and in Ekor Kucing, Kepala Batas.

Early last month, Parti Cinta Malaysia (PCM) vice-president Huan Cheng Guan highlighted in the media that a DAP assemblyman and his brother were given a 60-year lease on a piece of agriculture land in Bukit Mertajam with an 88% discount on the premium.

In response, Chief Minister Lim Guan Eng said that the application was not new as the land was inherited from their mother. 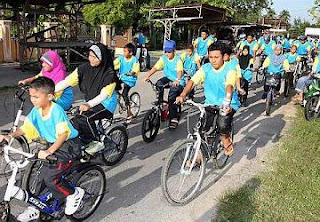 ABOUT 60 people, led by Deputy Chief Minister 1 Datuk Mansor Othman, cycled to three villages in his Penanti state constituency as part of a community out-reach programme.

The event, titled ‘Jom Pakat Kayuh’, was organised by the Tanah Liat Community Security and Develop-ment Committee (JKKK) and it was aimed at fostering goodwill among the villagers there.

The three villages were Kampung Tok Elong, Perkampungan Berapit and Kampung Tanah Liat while the participants were aged between eight and 71.

“We organised the cycling event as it would facilitate us to iden- tify problems faced by the people and to explain to them about the state government’s policies,” Mansor said after the event re- cently.

He said the event was more than just a cycling expedition as he also managed to inspect the progress work at Sungai Ara, which was selected to be deepened as part of a flood mitigation project.

Suhaimi said the ride gave Mansor a better feel of his constituency.

“The event received an encouraging response from the villagers,” he added.

Sharp rise in investments from Singapore first half of year

“Singapore, which mostly imports technology relating to aerospace, invested RM258mil in 2008 and RM193mil in 2009.

“The increase in investments is due to the efforts of the state government in disseminating information on investment opportunities in Penang,” he said in his winding-up speech.

Mansor said Malaysian Industrial Development Authority approved RM4.63bil worth of investments involving 56 projects in Penang in the first seven months of the year.

From that amount, local investments contributed RM1.04bil while RM3.59bil was from foreign direct investments, he said.

Jagdeep Singh Deo (DAP-Datuk Keramat) complained that there were no chairs, tables and even lightbulbs in the three halls used by the Community Security and Development Committees in his constituency when he received the keys to the buildings last year.

“Why has this happened? I was told by the district office that the items were given to the previous assemblyman.

“Were the items bought with his own money or were they government property?” he asked.
at 10:11 AM