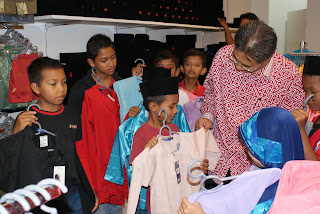 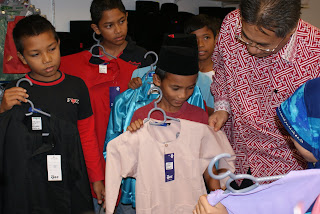 The children aged between four and 12 were invited to the Kamdar Supermarket here to buy clothing based on their preference after they each received RM100 from Mansor, who is also Penanti assemblyman.

The children were identified by the Community Development and Security Committee chairmen from the Penanti constituency.

Mansor said the children included orphans and those from single parent families.

“I have plans to embark on a special education programme for children in these categories,” he told reporters at the supermarket yesterday.

Hospital assistant Nor Izawati Shafie, 31, said she was thankful to Mansor for helping to buy festive clothing for her children, Mohd Haikal Mohd Ziahulhaq, four, and Nur Izzah Maisara, two.

“I became a single mother after my husband died in an accident in 2008.

“I am happy that there are people who care for us,” said Nor Izawati, who works at Penang Hospital.

Orphan Siti Delima Saad, 12, who is the youngest of eight siblings, said she was excited after being told about the festive shopping.

“Despite the joy, I will miss my mother Rohani Ahmad’s delicious ketupat and rendang.

“My mother was a sweeper at the Tenaga Nasional Bhd office in Bandar Perda. She died in June after being struck by lightning. My father died about 10 years ago,” she said.
at 9:31 AM